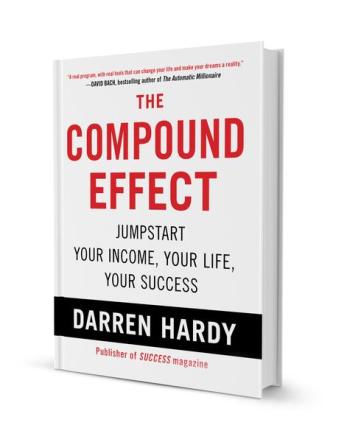 If I could choose only one concept that I would encourage everyone to research and understand, even at its most basic level, it would be The Compound Effect. Once you understand it’s true power, nothing will seem out of reach for you.

Recently, I re-read The Compound Effect by Darren Hardy just to refresh my mind, as it had been a while since I first stumbled across this book. The book is broken up into learning the principals of the effect, and then many different anecdotes and examples of how it can be applied to your own life in almost every aspect. When you hear the word’s ‘Compound Effect’, I would say the majority of people would instinctively think about its financial connotations, and they would be right to do so, as in the financial world it is an incredibly powerful force which has helped many people become incredibly wealthy individuals. However, once you understand the basic principles of the magic of compounding, you will quickly realise how it can be applied to everything you do.

The beauty of the Compound Effect is it does not require you to make any huge, life-disrupting decisions to get it started, because as we all know, if someone has to make a huge sacrifice to make a change in their life, they most likely won’t bother doing it, they will just stay on the path they are on. The Compound Effect is all about making lots of small changes, consistently over a period of time, building slowly towards the end goal.

If I told you that you would have to make two or three BIG sacrifices today to get to where you want to be, would you do it? You might be the small percentage of people who would be willing to do that, but for the majority of people, you would probably find that to be a daunting task, and it could put you off altogether. However, if I said you only needed to make ten small sacrifices over the next month to get to where you want to be, I think most people would be up for giving that a try, and that right there is the basis of The Compound Effect.

One of the most thought-provoking examples of The Compound Effect that Darren Hardy highlights in his book is the story of ‘The Magic Penny’. (Below is an excerpt from the book)

If you were given a choice between taking $3 million in cash this very instant and a single penny that doubles in value every day for 31 days, which would you choose? If you’ve heard this before, you know the penny gambit is the choice you should make—you know it’s the course that will lead to greater wealth. Yet why is it so hard to believe choosing the penny will result in more money in the end? Because it takes so much longer to see the payoff. Let’s take a closer look.

Let’s say you take the cold, hard cash and your friend goes the penny route. On Day Five, your friend has sixteen cents. You, however, have $3 million. On Day Ten, it’s $5.12 versus your big bucks. How do you think your friend is feeling about her decision? You’re spending your millions, enjoying the heck out of it, and loving your choice.

After 20 full days, with only 11 days left, Penny Lane has only $5,243. How is she feeling about herself at this point? For all her sacrifice and positive behaviour, she has barely more than $5,000. You, however, have $3 million. Then the invisible magic of the Compound Effect starts to become visible. The same small mathematical growth improvement each day makes the compounded penny worth $10,737,418.24 on Day Thirty-one, more than three times your $3 million.

In this example, we see why consistency over time is so important. On Day Twenty-nine, you’ve got your $3 million; Penny Lane has around $2.7 million. It isn’t until Day Thirty of this 31-day race that she pulls ahead, with $5.3 million. And it isn’t until the very last day of the month-long marathon race that your friend blows you out of the water; she ends up with $10,737,418.24 to your $3 million.

Very few things are as impressive as the ‘magic’ of compounding pennies. Amazingly, this force is equally powerful in every area of your life.

Here is another example showing the true power of The Compound Effect.

Come again? Am I saying that your four-dollar-a-day coffee habit is going to cost you $51,833.79 in twenty years? Yes, I am. Did you know that every dollar you spend today, no matter where you spend it, is costing you nearly five dollars in only twenty years (and ten dollars in thirty years)? That’s because if you took a dollar and invested it at 8 percent, in twenty years, that dollar would be worth almost five. Every time you spend a buck today, it’s like taking five dollars out of your future pocket.

I used to make the mistake of looking at a price tag and thinking that if an item was listed at fifty dollars, it cost me fifty dollars. Well, yes, in today’s dollars. But if you consider the potential value of that same fifty dollars after it has been invested for twenty years the cost (what you lose by spending that money rather than investing it) is four or five times greater! In other words, every time you look at an item that costs fifty dollars, you have to ask, “Is this item worth $250?”

If it’s worth $250 to you today, then it’s worth buying. Keep that in mind next time you go to a place like Costco, with all sorts of amazing things that you didn’t know you had to have. You go in to buy twenty-five dollars’ worth of necessities and walk out with $400 of stuff instead. Next time you walk into one of those bargain basement stores, assess things from this future-value standpoint. Chances are you’ll put down that fifty-dollar crepe maker so ‘Future You’ will have $250 more in the bank. Make the correct choice every day, every week for many years, and you can quickly see how you can become financially abundant.

When you track your habits and spending with this awareness, you’ll find yourself showing up in your life very differently. You’ll be able to ask yourself, “Is having a coffee once every day worth the eventual price of a Mercedes-Benz?” Because that’s what it’s costing ‘Future You’. Even more than that, you’re not sleepwalking anymore. You’re aware and conscious and making better choices.

The Compound Effect is truly amazing, isn’t it?

If you’re interested in picking up ‘The Compound Effect by Darren Hardy, then feel free to click on the image below to use my affiliate link, as this will help support the blog.

As always, thank you for taking the time to read my blog, If you could Like and Share this post I would be most grateful, and feel free to Follow the blog for many more posts on Personal Finance and my journey to F.I.R.E.

*No copyright infringement intended with use of images*

Published by Plan On F.I.R.E

View all posts by Plan On F.I.R.E

5 thoughts on “The Magic of The Compound Effect”